Since the turn of the century, South American governments and regional organisations have adopted the world’s most open discourse on migration and citizenship. At a time when restrictive choices were becoming increasingly predominant around the world, South American policymakers presented their discourse as being both an innovative and exceptional ‘new paradigm’ and part of a morally superior, avant-garde path in policymaking. This book provides a critical examination of the South American legal framework through a historical and comparative analysis. Diego Acosta uses this analysis to assess whether the laws are truly innovative and exceptional, as well as evaluating their feasibility, strengths and weaknesses. By analysing the legal construction of the national and the foreigner in ten South American countries during the last two centuries, he demonstrates how different citizenship and migration laws have functioned, as well as showing why states have opted for certain regulation choices, and the consequence of these choices for state- and nation-building in the continent. An invaluable insight for anyone interested in global migration and citizenship discussions.

‘Dr Acosta’s sensitivity to historical and legal national context and his appreciation of regional interaction and identity make this marvellous book a model of comparative research and analysis. Meticulously researched and eloquently written, it should be required reading for scholars, students and stakeholders with an interest in migration and mobility as it demonstrates important lessons that both states and activists can learn from policy and practice in South America.’

‘Diego Acosta’s book is eye opening. It shows how South America has not only been shaped by immigration in its history, but still embodies welcoming attitudes and inclusive conceptions of citizenship today and might even provide an alternative to the European model of regional integration in the future. A must-read for those interested in South American studies, but also an excellent contribution to the comparative literature on migration and citizenship.’

‘This volume is an excellent contribution to knowledge about migration globally. The careful analysis of migration law on the South American continent is of immense importance and has never been undertaken before in English.’

‘A model of transnational history. It offers a deep and revealing examination of the formation of national identity, citizenship, and the foreign as legal, political, and cultural processes over the last two centuries. Its findings are particularly relevant, and hopeful, at a time of rising xenophobic politics worldwide.’

‘Acosta’s work provocatively challenges legal studies narrowly based on North American and European experiences. This book is an essential reference for the comparative analysis of migration and citizenship policies in South America and beyond.’

David Scott FitzGerald – co-author of Culling the Masses: The Democratic Origins of Racist Immigration Policy in the Americas

2 Open Borders in the Nineteenth Century: Constructing the National, the Citizen and the Foreigner

5 The Construction of the Irregular Immigrant. The Principle of Non-Criminalisation of Undocumented Migration

6 The Right to Migrate as a Fundamental Right? The Construction of the Foreigner through Equal Treatment

7 Open Borders and the Construction of a South American Citizen

8 Conclusion. Constructing and Deconstructing the Foreigner: An Innovative and Exceptional Approach?

‘This is, and will continue to be, the book on the South American region’s legal approach to migration and citizenship. Selecting two centuries of law in an (unjustifiably) understudied region, Acosta has contributed a meticulous legal analysis and rich multilingual bibliography to a plethora of scholars.’ 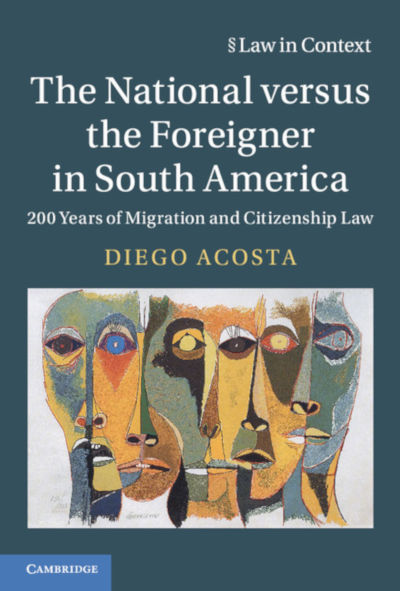